Cats are known for chasing, hunting, killing, and playing with mice. The majority of cat toys are in the shape of mice. If you’ve ever watched a cat follow and pounce on one of these … 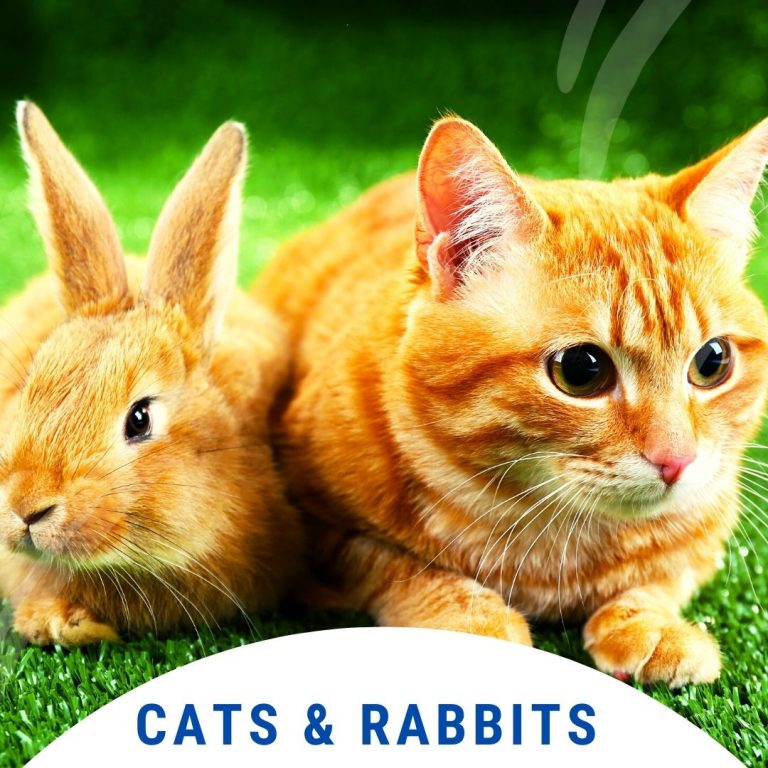 Cats are known for chasing, hunting, killing, and playing with mice. The majority of cat toys are in the shape of mice. If you’ve ever watched a cat follow and pounce on one of these mouse toys, you’ll understand how good a hunter your cat is, even if they were born in confinement. Granted, mice aren’t the only animals that cats like killing. Many cat owners have tales of their feline bringing them dead birds as a token of affection.

Birds and mice are very minimum creatures. Even though cats are considerably larger than mice and birds, would they still attack, kill, and consume larger animals, and do cats eat rabbits? Cats like hunting and killing. They go so far as to conduct sadistic games with their newly captured captives.

So, do cats eat rabbits? Cats are obligate carnivores, meaning they derive their food from other animals. They consume the animals that eat plant stuff instead. Cats are well-known for their fondness for killing mice and birds. Though it may seem challenging to imagine that your cat won’t eat your food if it’s the incorrect consistency, cats will consume a wide variety of animals when they caught and slaughtered. Cats have known to capture and consume fish, in addition to small mammals such as squirrels, chipmunks, mice, rats, rabbits, and guinea pigs, and tiny non-mammal species such as birds, lizards, and frogs.

Hunters with a Plan

Felines are naturally clever predators that enjoy using their skills. Your cat has most certainly stalked and pounced on its toys before. It is because cats do not kill to obtain food; they also kill for the sake of having pleasure. Cats like hunting and killing, and they’re good at it.

You can bet that if a cat finds an opportunity to hunt a large, defenseless creature like a rabbit, it will pounce at it. Every cat will attack every rabbit it sees, but if you have a large cat and spots an unguarded bunny, it will attack.

Will a rabbit be killed by a Cat Bite?

Cats have a very nasty bite. You’ll be alright because of your size, but smaller animals like rabbits will have problems if attacked by a cat. Cat saliva also includes microorganisms that can infect a rabbit. Because of the severity of the wounds and bacterial infection, it will most certainly die soon after.

Humans have a romanticized picture of nature, believing that everything is serene and harmonious. Some even believe that only humans are cruel enough to murder for pleasure, but this is just not true. Cats like murdering for the sheer-pleasure of it, and they enjoy torturing their victim while slowly killing them.

Cats have known to murder numerous things they don’t even consume because of their need to kill. Granted, if a cat is hungry enough, it will devour a rabbit. Housecats in captivity are rarely hungry to consume the prey they kill. They’re also pleased with the gourmet cuisine you’ve prepared for them. Cats have a strong desire to hunt and kill, so they may kill a rabbit simply for the joy of it, with no intention of eating it.

It doesn’t imply a cat should devour a rabbit just because it can. It gets used to wiping out populations of rabbits and rodents, but it can also be dangerous to your cat. Humans that hunt rabbits can test them for tularemia, while cats can’t do so.

How Can Rabbits get Protected From Cats?

Why is it that my cat keeps bringing the dead rabbits?

For years, people have disputed why cats bring their dead animals. Some have speculated that it is the cat’s way of bragging to their owners, showcasing their skill as seasoned hunters. A few bites may have been taken out of this sort of dead rabbit, indicating the cat’s success. The arrogant cat may choose to accept a pat on the back from its owner while storing the prize as a treat for later. Others believe the animal is a gift, a method for the cat to express gratitude to their owner for feeding them.

Others believe the cat is attempting to teach humans how to hunt in the same way its kittens. Female cats, in particular, may see their human partners like family and may wish to contribute to the family’s food supply by hunting and bringing their kills home. They may even deliver half-living animals that their owners will continue the hunt. As a result, you shouldn’t treat deceased rabbits any differently. It’s just another successful hunting excursion for the cat.

What Causes Cats to Kill Rabbits?

The instinct for the hunt is the driving force behind the kill for a well-fed kitty with a caring owner. However, since we know that cats enjoy playing with their prey and don’t always finish them off, there are plenty of pets who would only pursue the rabbit for the thrill of the chase. The cat may consume only a minimal amount of the rabbit to celebrate the victory. The need for food to survive is the impetus for a feral cat caring for a litter of kittens. In this case, the cat will most likely transport the carcass to a location where it is safe from other predators and consume it.

Cats will hunt and devour small animals, including mice, birds, and rabbits. Cats have a strong urge to hunt and kill. If you have a pet cat, keep it away from rabbits to avoid catching tularemia. To keep your rabbit secure from neighboring cats, make sure it gets stowed away in a cat-proof cage.

Do Cats Eat Birds? Is it true?